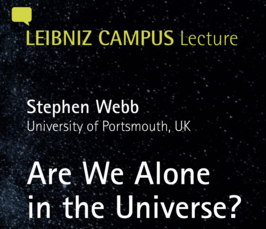 Leibniz Campus Lecture “Are We Alone in the Universe? The Fermi Paradox and the Search for Extraterrestrial Intelligence”

Why does the Universe appear silent and empty when life - and presumably intelligent life - exists elsewhere?

Our Galaxy contains hundreds of billions of stars and the Universe contains hundreds of billions of galaxies. So if we grant that there is nothing special about our home planet then it is hard not to conclude that life - and presumably intelligent life - exists elsewhere. But if we also grant that there is nothing special about humanity's arc of technological progress then it is hard not to conclude that, at some stage in the 13.8-billion-year history of the cosmos, an extraterrestrial civilisation should have disturbed the universe in a way that we could now detect. They should have left evidence of their existence - messages; artefacts; signatures of their technology. And yet the universe appears silent and empty. This contradiction between expectation and observation often goes by the name of the Fermi paradox, and in this talk I discuss a few of the many resolutions that have been proposed. I would be delighted if audience members were prepared to share their own resolution of the paradox!