Homepage of the Museum für Energiegeschichte(n) 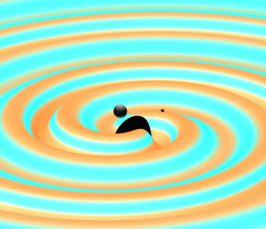 Talk by Benjamin Knispel on the current status and history of gravitational-wave astronomy.

In 1916 Albert Einstein predicted that cataclysmic events in the universe such as supernova explosions or merging black holes would cause tiny ripples in space and time: gravitational waves. It took more than 40 years for the first ideas for measuring these space-time waves to emerge and until 2015 when the first direct observation was achieved. The required laser-measurement technology was improved so far that it is only limited by fundamental physical effects such as quantum mechanics. Since then, the network of gravitational wave detectors has repeatedly detected these waves and thus opened up a new era in astronomy.