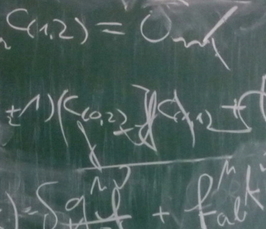 9.30am
Decoherence in quantum mechanics and quantumcosmology
Claus Kiefer, University of Cologne

How does the classical behaviour emerge in a world that is fundamentally described by quantum theory? The key to the answer is given by a process that was described for the first time 48 years ago - decoherence. Decoherence is the irreversible emergence of classical properties of a quantum system through the unavoidable interaction with its environment. In my talk, I give a general introduction into decoherence and present its most important theoretical and experimental applications. I discuss the situation in quantum mechanics including the relevance of decoherence for the interpretation of quantum theory. I then turn to quantum cosmology and explain how the classical appearance of the metric and matter fields can be understood in a fundamental theory of quantum gravity in which arbitary metric superpositions can occur. At the end I address the relevance of decoherence for the origin of the arrow of time.

In our search for a theory of quantum gravity it is worthwhile to investigate the effects of semi- classically combining general relativity with the principles of quantum theory. In the past, this was done in the framework of Euclidean quantum gravity, where time was taken to be imaginary. This approach was however never fully satisfactory. In this talk I will outline how one can define path integrals for gravity using real time, using the framework of Picard-Lefschetz theory. As an illustration of this method I will show how one can describe large quantum fluctuations during an inflationary phase, with both the inflaton field and the scale factor of the universe being quantised. I will also discuss the challenges for existing theories of the beginning of the universe.